The League of Utah Writers is organized into Chapters.  Living as I do in Connecticut, I am fortunate that there is an at-large chapter, the Just Write Chapter.  Indeed, it has a critique group, in which I have already participated, and it has a Newsletter.  The President of the chapter, Ann Gordon, asked me to write a review of the recent League of Utah Writers Annual Conference held at the Davis Conference Center, in Layton, Utah. 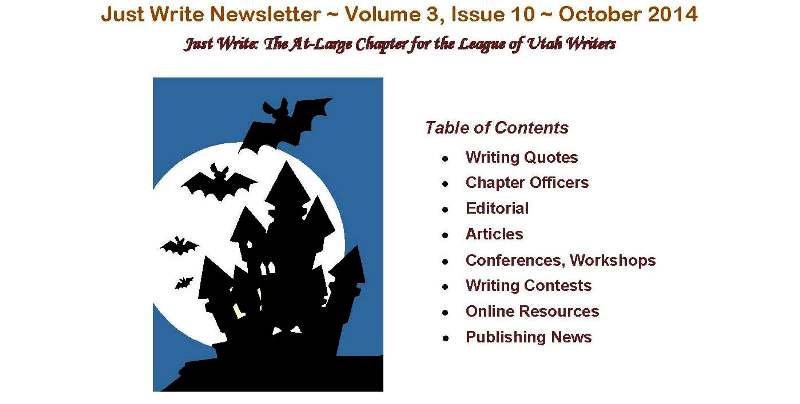 This was my first LUW conference. The Davis Conference Center, a gem under the HAFB flight path, felt familiar to me the first moment I got out of my car because I was raised under that flight path in Clearfield. At the registration desk I met a friendly fellow in a coat and tie who handed me a fistful of mini-chocolate bars. What a great beginning!

I found the LUW Conference to be 100% craft oriented. I picked “Writing Fight Scenes” as my first workshop. Christine Haggerty, the leader, stressed the following: Our character existed before the fight, our character shouldn’t do anything in the fight that’s inconsistent, the fight should be choreographed, and have an aftermath in injuries. Most attention was paid to physical injuries, but I believe emotional injuries are as important.

The World Building session was led by the man with the chocolate bars, Bruce Allred. His presentation was truly stimulating and I hope he has a copy he can send you if you ask.

Saturday – my primary goal was to find and meet Ann. Again no provision for meeting and schmoozing, neither breakfast nor coffee break. I guess LUW believes we are all independent, self-reliant sorts. I did finally track down Ann Gordon. And Tim Keller. Hooray!

11:00 Alexander Gordon Smith – Creating Characters Who Talk Back. A cheeky session title with a witty Englishman. For those who did not attend this one, you can guess the content and should keep it in mind. He explained how to make characters come alive.

Finally, 12:00 Lunch. Being vegan, I was prepared for the worst, but they were very solicitous and helpful. At my table everyone was lively, interesting, and fun – exactly what I wanted. I enjoyed Jill Vanderwood’s presentation on Public Speaking. I hope everyone took away the core message: that we can all help our writing careers by speaking.

In the afternoon I attended sessions devoted to personal development. I learned about marketing with Kathryn and Doug Jones; then how to overcome things that stop us from writing with Peggy Eddleman; and at 4:00 Shanna Beaman discussed Strategies and Goals. Shanna provided some good handouts; if you did not attend this presentation, perhaps you could write Shanna and ask for a copy of her handouts.

Finally, the big event at 5:00 – Dinner. My food was just fine, how was yours? And the Keynote Address by Johnny Worthen provided everything we had come to expect from him in a day and a half of exposure. His tour de force provided a catalogue of ways a writer is truly crazy. When the Awards Ceremony started I began to worry that this meeting would keep us up all night, but Nope. The economist, Bruce Allred, ran a taut, economical program, moving it right along, with humor and good cheer for the winners. Toward the end of the hundred plus awards I began to fear I had been shut out. But not at all. I had a wonderful surprise.

I want to thank everyone in the League of Utah Writers for the opportunity to join, to attend the conference, and to have Every Soul Is Free judged against all the fine writers in the League.

Editor’s Note: Edward flew in from the East Coast to attend the LUW conference. His latest novel, Every Soul is Free, won the prestigious Gold Quill Award from the League of Utah Writers this year. The Gold Quill is the Grand Prize for Best Novel.